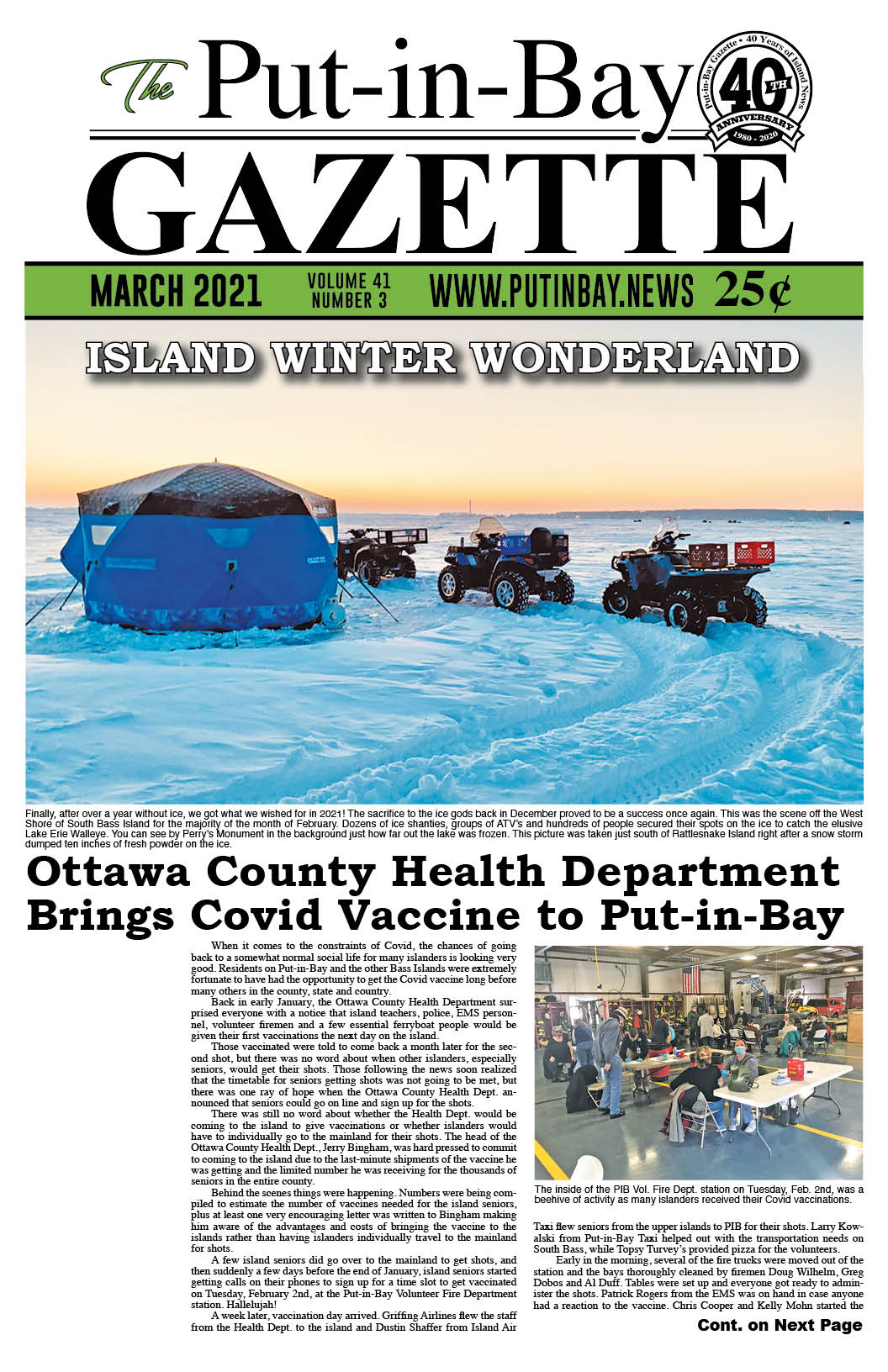 When it comes to the constraints of Covid, the chances of going back to a somewhat normal social life for many islanders are looking very good. Residents on Put-in-Bay and the other Bass Islands were extremely fortunate to have had the opportunity to get the Covid vaccine long before many others in the county, state, and country.

Back in early January, the Ottawa County Health Department surprised everyone with a notice that island teachers, police, EMS personnel, volunteer firemen, and a few essential ferryboat people would be given their first vaccinations the next day on the island.

Those vaccinated were told to come back a month later for the second shot, but there was no word about when other islanders, especially seniors, would get their shots. Those following the news soon realized that the timetable for seniors getting shots was not going to be met, but there was one ray of hope when the Ottawa County Health Dept. announced that seniors could go online and sign up for the shots.

There was still no word about whether the Health Dept. would be coming to the island to give vaccinations or whether islanders would have to individually go to the mainland for their shots. The head of the Ottawa County Health Dept., Jerry Bingham, was hard-pressed to commit to coming to the island due to the last-minute shipments of the vaccine he was getting and the limited number he was receiving for the thousands of seniors in the entire county.

Behind the scenes, things were happening. Numbers were being compiled to estimate the number of vaccines needed for the island seniors, plus at least one very encouraging letter was written to Bingham making him aware of the advantages and costs of bringing the vaccine to the islands rather than having islanders individually travel to the mainland for shots.

A few island seniors did go over to the mainland to get shots, and then suddenly a few days before the end of January, island seniors started getting calls on their phones to sign up for a time slot to get vaccinated on Tuesday, February 2nd, at the Put-in-Bay Volunteer Fire Department station. Hallelujah!

A week later, vaccination day arrived. Griffing Airlines flew the staff from the Health Dept. to the island and Dustin Shaffer from Island Air Taxi flew seniors from the upper islands to PIB for their shots. Larry Kowalski from Put-in-Bay Taxi helped out with the transportation needs on South Bass, while Topsy Turvey’s provided pizza for the volunteers.

Early in the morning, several of the fire trucks were moved out of the station and the bays thoroughly cleaned by firemen Doug Wilhelm, Greg Dobos, and Al Duff. Tables were set up and everyone got ready to administer the shots. Patrick Rogers from the EMS was on hand in case anyone had a reaction to the vaccine. Chris Cooper and Kelly Mohn started the process by doing the paperwork needed to get a shot. Among those giving the shots were personnel from the Health Dept. and PIB Yacht Club Commodore Marcia Ashley who volunteered to give shots. Proof of vaccination cards were filled out and the first timers were instructed to come back, same place, same time, on Tuesday, March 2nd, for their final shot.

Getting the Covid Moderna vaccine was nowhere near as invasive as the Covid tests islanders took at the fire station last summer. If you didn’t scream too loudly or pass out after the shot, you were directed to an area off to the side to wait for 15 minutes to see if you had any adverse reaction. Many of those vaccinated enjoyed the socialization of seeing people they hadn’t seen in months. The entire vaccine shot process lasted about a half-hour.

When all was said and done, 55 second shots and 152 first shots were administered safely and efficiently in about a five-hour time frame. The entire process went very smoothly and those who made it all happen can be proud of their effort. A big thank you goes out to everyone who helped out.

All the news in the Put-in-Bay Gazette is based on facts, either observed and verified first, second or third hand by the reporter or reported and verified from knowledgeable sources or from wide-spread rumors. We never use fact-check websites because our island news is too new for the fact-checkers to accurately check.