Towering 352 feet in the air, Perry’s Victory and International Peace Memorial is a powerful testament to everlasting peace and friendship between nations. Built in 1915, this massive Doric column recently underwent a series of repairs in 2009 and reopened in 2012. The national monument is an iconic building well-known throughout the Great Lakes region in Ohio and the United States.  Perry’s Monument symbolizes American tradition and respect for our country’s history. 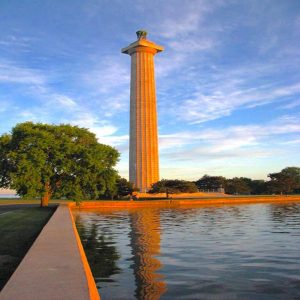 Perry’s Monument, as it is known, sits on an isthmus close to downtown Put-in-Bay. An isthmus is a narrow piece of land the connects two larger areas. This isthmus is also what gives Put-in-Bay its unique appearance.

It is open every day during the summer season. Adults pay $7 while children are free. The last ascent to the observation deck is 30 minutes before closing. It is a short walk from the Jet Express terminal and the downtown attractions.

Visitors pay the admission fee at the Visitor Center to access the observation deck. The Visitors Center is free of charge. A national park service (NPS) ranger escorts groups to the deck via an elevator.

Park Rangers are available on the deck to answer any questions you may have about the monument and its history. Canada lies in the distance, easily seen on clear days. This five mile stretch between Canada and the US is the longest undefended border in the world.

This monument is the only international peace symbol within the National Park system. The column stands 47 taller than the Statue of Liberty and is just a few feet shorter than the Washington Monument. The observation deck sits 12 feet higher than Lady Liberty’s torch making it one of the tallest monuments in the country.

The History of the Monument

“Don’t Give Up The Ship.” Spoken by Commodore Oliver Hazard Perry to his troops as they defended this area against the British in the Battle of Lake Erie, this words remain stirring to this day. Despite being heavily unnumbered, Perry was victorious in taking control of Lake Erie. This was a crucial turning point for the War of 1812 and the US went on to win the war. The British fleet fought the Battle of Lake Erie in the waters near South Bass Island. Soon after, Oliver Hazard Perry sent the fleet back to Great Britain and celebrated the American victory.

Buried at the base of the column are six soldiers who perished during the batter. Both American officers and  British officers are remembered at Perry’s Monument. The names of all the soldiers slain in the battle including Commodore Perry are also etched inside the grand rotunda.

After this war, relations between the US and England remained peaceful ever since. The monument is a symbol of this lasting peace, its construction a multi-state effort to “inculcate the lessons of international peace by arbitration and disarmament.”

Events at the Victory Monument

The grounds in front of the column are a popular space for events all summer long. The park system also sponsors events.

Children and adults partake in Arts on Erie, a week long arts and crafts festival held on the back porch. The Put-in-Bay Maritime Celebration with U.S. Brig Niagara is a celebration of history and tradition on Put-in-Bay. Tour this large ship and enjoy a festive atmosphere all weekend long. Arrive early and snag the best seats for the Fourth of July Fireworks at Perry’s. There is even music to accompany the display. The Lake Erie Islands are not a boring place!

The monument is an important symbol of everlasting peace as well as a community hub for Put-in-Bay. We’re lucky to have it! People from all over the United States come to see the monument. Most of our guests come from Sandusky, Cleveland, Michigan, and even New York.