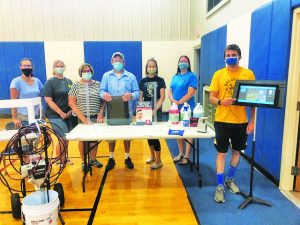 Sat., Aug. 1st – There’s a wedding reception in a big tent on the shoreline where a rookie NFL player drove his orange Camaro off the seawall into the lake on June 30th. If the reception had taken place on that date, he would have driven right through the middle of the guest-filled tent. Island Green Week was supposed to start today, but was cancelled due to Covid-19 concerns.

Sun., Aug. 2nd – The wind blows hard enough (34 mph) to drive the water down about as far as it has been for several months. Rain for the day measures .82 inches. Volunteers Art and Susie Otermat are out in the Ladd Carr Wildlife Woods and Jane Coates Wildflower Trail picking up litter.

Mon., Aug. 3rd – Four Canada Goose keep crossing Bayview Ave. between the Crew’s Nest and Topsy Turvey’s in the morning. Golf carters have to slow down to let them cross the road.

Tue., Aug. 4th – The PIB Village Council meets in the morning. Among the topics of discussion are the proposed police auxiliary force, a new generator for the water treatment plant, overnight rental of golf carts, the budget and security gates at the public docks. Tree trimmers are working on Columbus Ave. on East Point cutting limbs away from electric lines. At the Monument, maintenance workers are cleaning the gutters along Bayview Ave.

Wed., Aug. 5th – The Safe Island Task Force meets at the Niagara Event Center shortly after lunch. A waterspout is spotted over the waters off the backside of the Monument. Richard Gump and helpers are working on the new entrance to Cooper’s Woods next to Mother of Sorrows. The Middle Bass ferry M/V South Bass experiences a hiccup and has to be towed to its dock by the M/V Islander. The annual Pig Roast fundraiser for the Nature and Wildlife Center takes place at the Goat. You drive by and pick up your dinner. Thanks to Rob Hard for cooking the roast pork, to Pauline Garsteck for the desserts and all the others who helped with the event. There is another exciting softball game at the ball field.

Thu., Aug. 6th – The Lake Erie Islands Nature & Wildlife Center closes its online fundraiser auction at 10 a.m. Among the great items auctioned off are folkart works by Canoe Bob. Winners are announced at noon. Both the private and public docks in the harbor are filled with more boats than we’ve seen in weeks. Duff & Katrina Spatafore have a dinner date at the Forge.

Fri., Aug. 7th – Put-in-Bay School Superintendent Steve Poe is in California on vacation and on his way to Lake Tahoe. Did you see the big C-17 cargo plane fly low over the island? The Island Club is a happening place after bars are ordered to close at 10 p.m. due to Covid-19.

Sat., Aug. 8th – There’s a little wedding at the North Bass Chapel. Boaters showed their support for President Donald Trump during the Ottawa County Trump Flotilla in Lake Erie and paraded through the harbor at Put-in-Bay before going on the Kelleys Island. The Yankee Air Museum’s B-17 Bomber “Yankee Lady” is seen flying over the island. One person says he hasn’t seen so many boats in the harbor and in the passage between PIB and Middle Bass since the 200th anniversary celebration of the Battle of Lake Erie.

Sun., Aug. 9th – I-LYA officials hold a ceremony at the Commodore’s Memorial in DeRivera Park. One of those is Al Ashley who is celebrating his birthday. Mother Mary Staley blesses the antique fleet with holy water from a five-gallon bucket.

Mon., Aug. 10th – Jack Spayde from Fox’s Den is spotted watering the flower baskets in DeRivera Park. The PIB Chamber of Commerce holds its monthly member meeting via Zoom. The Stone Lab operations crew took our Gibraltar 3 vessel out to test our new A-frame hydraulics system to sample fish using a larger trawl than we had previously.

Tue., Aug. 11th – The World War II field artillery piece on the waterside of DeRivera Park is removed for restoration. At the Village Council meeting, Ray Fogg offers the resources of the Safe Island Task Force to the Village to help find additional funding for the island police department,

Wed., Aug. 12th – It’s the Boardwalk’s last Lobster Mania night of the 2020 season. Dustin Heineman from Heineman Winery says it looks like a heavy crop of beautiful Catawba grapes this year. Michelle O’Donnell is kayaking around Gibraltar Island and a fish jumps into her kayak. It scares the bejeezus out of her. After many ew, ew, ew, she is able to catch and release it. She is not sure what type of fish it is, but invasive Asian carp are known to be jumpers.

Thu., Aug. 13th – The EMS ambulance and police pass tree trimmers clearing lines on Chapman Rd. on their way to a call further down the street near the lake. The Put-in-Bay Chamber of Commerce emails out a list of more cancelled events due to Covid-19 concerns. The Garden Club cancels its August program that was about pruning shrubs.

Fri., Aug. 14th – The lake’s water temperature at PIB is 73 degrees. Up on North Bass the 1868 post office building is getting new 120 MPR shingles. Canada and the U.S. announce the extension of the closed border restrictions until Sept. 21.

Sat., Aug. 15th – Biden for President yard signs on Mitchell Road are either stolen or destroyed. Some of the signs are later found in the trash. More than 50 teams take part in the Battle of the Bay 2020 Volleyball Tournament at McCann’s field. Nary a mask is to be seen. There’s a luau at the yacht club.

Sun., Aug. 16th – Mary Ann and Bernie Meyers from the West Shore are celebrating their 50th wedding anniversary at Tipper’s with other 50+ anniversary couples.

Mon., Aug. 17th – The algal Bloom Position Forecast satellite imagery for the islands shows little to be concerned about for this part of the lake.

Tue., Aug. 18th – The Put-in-Bay Chamber of Commerce membership committee is meeting at the Island Club Pavilion to discuss 2021 membership packages. With business income down for 2020 due to coronavirus limitations, member dues are a tough topic to discuss.

Wed., Aug. 19th – There’s a graveside memorial service for longtime island resident Carol Schillumeit Sweeney at Maple Leaf Cemetery. Two planes are spotted in the sky above the island. They are doing air to air refueling.

Fri., Aug. 21st – 156 years ago on this date, there was an escape attempt by Confederate prisoners from the Union prison on Johnson’s Island in Sandusky Bay. The men were captured.

Sat., Aug. 22nd – The Put-in-Bay Property Owners Association meeting is held for the second month in a row at the pavilion at Perry’s Cave. The guest speaker is Ottawa County Auditor Jennifer Widmer. Jim Duffy picks her up at the Lime Kiln ferry dock to take her to the meeting. Former Skyway bartender Dave Long visits friends on the island after a 20-year absence.

Sun., Aug. 23rd – There are 34 cars in the afternoon’s antique car parade. Kathi Spayde posts individual photos of them on Facebook.

Mon., Aug. 24th – Miller Boat Line changes its schedule a bit. The Crew’s Nest cuts back on its pool hours. These are sure signs the beginning of the end of the season is here. Over on Middle Bass Island, the Middle Bass General Store is serving a green beans and ham special. Up on Pelee Island, their evening Council meeting is conducted via Zoom.

Tue., Aug. 25th – The Put-in-Bay Village Council holds a 10-minute meeting concerning an ordinance to address the approval by an engineering firm of site plans for commercial development in the Village. Overnight dockage is 50% off at the Keys, plus if you bring your dog to the Keys, it gets a complimentary treat and tropical bandanna! The PIB High School Girls Panther Volleyball Team played its first games of the season against the Bowling Green Christian Lions.

Thu., Aug. 27th – It’s 97 degrees at the Lime Kiln Dock late in the afternoon. Ryan Stoiber, Brian Cultice and some other year-round residents participate in an online fantasy football draft in the late evening.

Fri., Aug. 28th – The Put-in-Bay Township Park District closes on a purchase of property adjacent to the Dodge Woods Preserve on Thompson Rd. Workers from the Census Department are going door to door in some neighborhoods. A heavy storm hits the island in late afternoon causing some flooded sidewalks downtown by DeRivera Park.

Sat., Aug. 29th – Columbus legend Chris Logsdon is entertaining at the Reel Bar in the afternoon. At the Put-in-Bay Yacht Club, the Reverse Raffle Fundraiser is taking place. On the dinner menu are sausage, pork sliders, pierogies and sauerkraut.

Mon., Aug. 31st – The September issue of the Put-in-Bay Gazette is printed in Sandusky. It’s the first day back to school for island students.