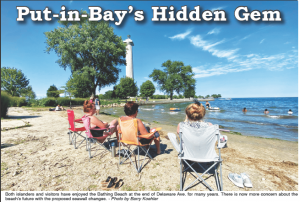 Both islanders and visitors have enjoyed the Bathing Beach at the end of Delaware Ave. for many years. There is now more concern about the beach’s future with the proposed seawall changes. – Photo by Barry Koehler

Restoration plans for the Monument seawall solicited concern from citizens when it comes to the Bathing Beach at the east end of Delaware Ave. An open letter to the Put-in-Bay Community from island resident Jody Frimel was sent out after she took part in the virtual open house on July 29th, showing plans for the proposed wall improvements.

Also included was a sample petition letter which could be sent to the National Park Service if you agreed with Jody’s concerns. Jody, who has been involved with the bathing beach for the last several years, says she learned that the proposed restoration does not include any provisions to protect the Bathing Beach which she and others believe has been adversely affected by the current South Seawall.

In response, several groups and individuals have voiced their concerns for the preservation of the beach.

The Village Council has requested that the National Park Service work with the Village engineers and Ottawa County Officials to review the proposed construction of the seawall in direct relationship to its impact on the Bathing Beach.

Starting in late July and ending on Friday, August 21st, islanders had the opportunity to comment on the proposal to restore the north and south sea walls at Perry’s Monument. On Wednesday, July 29th, there was an online open house explaining the entire project that officials are hoping to begin work on this coming year.

The open house provided the opportunity to comment and ask questions about the restoration proposal. The restoration will limit wave overtopping, manage storm water to protect the cultural resource, help ensure the health and safety of the public and enhance the visitor experience while preserving the setting of Perry’s Victory & International Peace Memorial.

Background
The Monument sits at the site of Perry’s Victory on a low-lying isthmus connecting the east and west sides of South Bass Island. Historically, Put-in-Bay was two separate islands with marsh in between. Without the seawalls the site would return to marsh habitat. The seawalls protecting the site were originally constructed in 1936 to protect the site from Lake Erie and prevent shoreline erosion. The seawalls were raised and expanded, most recently in 1977, to better maintain and protect the nationally significant site. Lake levels fluctuate over time. Currently the Great Lakes are at the peak of a cyclical trend.

The current condition of the seawall is poor and is continuing to deteriorate. Storm water and lake water drainage is not adequate and flooding sometimes impedes traffic to and from the east portion of South Bass Island. Years of wave action, ice loading and geological processes have deteriorated and undermined the two seawalls resulting in the creation of sinkholes and other unsafe conditions.

Proposed Project
The goals of the project are to restore 3,340 feet of seawall and raise it to a new elevation of 12 to 24 inches higher. The North Seawall-center, which was built in 1936, would be entirely demolished and replaced. The remaining North Seawall would be partially demolished and repaired. The South Seawall would be partially demolished and repaired, plus an 80-foot extension would be added on the north side of the Bathing Beach.
The storm water system would be upgraded to minimize flooding. Lake water that splashes over the wall and storm water that lands in the Park would be conveyed to the lake through a combination of gravity outlets and two pumping stations. There would be a north storm water catchment area that would contain runoff from State Route 357 and the proposed sidewalk along the North Seawall. A vortex separator would treat the North Pump Station water prior to discharge.

To improve the visitor experience at the Monument, some of the enhancements include seating areas with benches, imbedded lighting (optional), a sidewalk along the North Seawall similar to the one on the South Wall (optional), and an interpretive plaza (optional). New wayfinding panels would help visitors connect with history and learn more about the memorial.

Construction Disruptions
Access to the Memorial and Visitor Center would not be impacted by construction. During construction, the work areas and staging area would be fenced off and closed to visitor access. Construction of the South Seawall to the west is scheduled to be completed prior to July 1st. Access to the Bathing Beach at the end of Delaware Ave. would be restricted during this phase of construction.