The Benson Ford Ship House is located in Put-in-Bay, Ohio on the shores of beautiful Lake Erie. This unique home is a magnificent four-story vacation home owned by Bryan Kasper and family. The Ship House was once the forecastle of a huge cargo ship created for Henry Ford and the Ford Motor Company, hauling iron ore around the Great Lakes. Now, it is a breathtaking scenic getaway and a must see family attraction on any visit to the Lake Erie Islands. Need a preview before you get here? Enjoy the Virtual Tour below.

The Benson Ford Ship House was formerly named the John Dykstra II after it was decommissioned in 1981. In 1992, this retired freighter was originally supposed to become a bed and breakfast located on South Bass Island but after a lengthy legal battle, it was determined that this large houseboat could not be used for this purpose. The owner at the time, Frank Sullivan, decided after this that he would sell the boat to the current owners, Jerry and Bryan Kasper.

This massive 7,000 square foot summer home is fully equipped with a full kitchen, dining room, family room, five bedrooms, five full baths, a garage, and a pilot house. The original walnut-paneled staterooms keep the authentic ship feel throughout the lake house that makes you feel as though you’re on a luxurious maiden voyage across the Great Lakes. 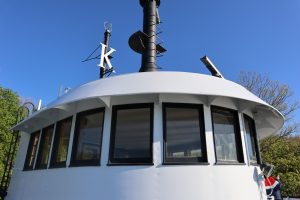 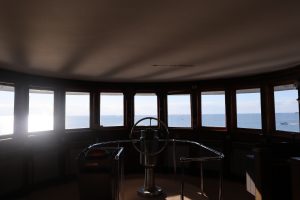 The Benson Ford Ship House is occasionally open for in-person tours, typically as a fundraiser for a worthy island cause. On these rare occasions, visitors are allowed to enter and take pictures and discover a different era.

The Ship House is a great family attraction for any road trip to Put-in-Bay, reachable out on West Shore by a refreshing golf cart ride or enjoyable afternoon walk. Visitors remark that it has some of the most breathtaking views on the island! Just a short drive from Cleveland and Toledo, The Benson Ford Ship House is now known as one of the most interesting houses on Put-in-Bay island and it sits on a cliff overlooking Lake Erie. Make sure to wave when you motor by on the Jet Express!