Greeting visitors on the southern point of the island, the South Bass Island Lighthouse was first lit in 1897. An important part of Put-in-Bay’s history, the lighthouse is much the same as it was when it was first built.

Operated by the Ohio Sea Grant, the South Bass Lighthouse is open for tours on select dates from June-October. Group tours can be scheduled from April – November by contacting the Stone Lab Bayview office.

Before heading to the top, visitors learn about the area’s history and pressing issues facing Lake Erie. The Ohio Sea Grant is also responsible for the Aquatic Visitors Center, Gibraltar Island, and Cooke’s Castle. Perhaps most importantly, they conduct extensive research at Stone Laboratory along with students from Ohio University.

Visitors then climb the stairs of the lighthouse to take in stunning views of Put-in-Bay and Lake Erie. Listed on the National Register of Historic Places, the grounds are open to the public from dawn to dusk with occasional closure for private events. 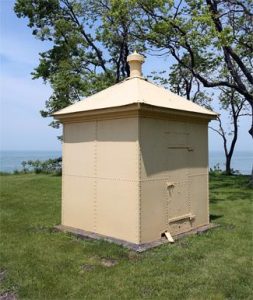 The History of the South Bass Island Lighthouse

The United States Lighthouse Board requested funds for a lighthouse in 1890 but it took some time to raise the desired amount of $8600 for its construction. Originally planned for placement on the northern tip, Lieutenant Charles T. Platt decided the extreme southern tip would be much better for a brand new lighthouse. So sure was Lt. Platt, he even carved “LH” into a tree on the site.

Unlike the more typical designs of the day, the lighthouse consists of a large, two-and-a-half story, red brick dwelling with an attached, twelve-foot-square tower. The tower stands forty-five feet tall and crowned with a fourth-order L. Sautter & Cie., Fresnel lens that produces a fixed red light with the use of a ruby chimney in its lamp.

Fresnel lenses have been called the invention that saved a million ships.

The tower was lit for the first time in 1897 by keeper Harry H. Riley. The lighthouse was now ready to perform its daily duties during the shipping season, which ran from March to late December. Mrs. Riley took charge of the lighthouse after her husband’s untimely death.

The next keeper, Charles Duggan cultivated the surrounding land with a vineyard occupying eight acres. He fell to his death in 1925. The history of the lighthouse is wide and varied. A very interesting monument on Put-in-Bay indeed.

South Bass Island Lighthouse is currently home to OSU research and academic staff. The lighthouse and grounds opened to the public in 2007 when the university decided to start offering tours during the summer. Besides the lighthouse and a modern replacement light tower, an 1899 barn and an 1897 oil house remain standing on the property. 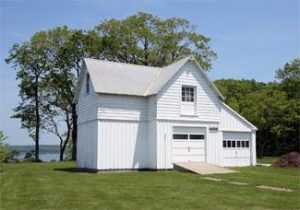 The lighthouse is pretty far afield occupying the most southern end of the island. Maple Leaf Cemetery is located close by as is the Put-in-Bay Airport. A nice day on Put-in-Bay may consist of a visit to the lighthouse along with a round of golf at Saunders Golf Course and a swim at South Bass Island State Park, all within relative walking distance to each other.