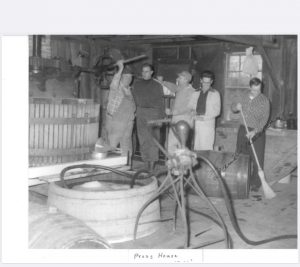 The building where Joe’s Bar stands today was built to be a press house to press grapes in the winemaking business. It is believed to have been built in the late 1860’s, or early 1870’s making it one of the oldest buildings, still standing on the island (older than Round House) and truly an integral part of the Put-in-Bay history.

The Victorian home next door and the press house were built by Max VonDohren. He and his wife owned the orchards and vineyards nearby. The property was passed down to their daughter Minnie and her husband, Edward Keimer. Edward made wine in the press house and sometimes had the cellar open as a place to drink his product. He was a large, strapping, somewhat intimidating man and was recounted to only have allowed German to be spoken in the household. Unfortunately, Minnie passed away, leaving her 8 children in the care of their father. Their youngest child Lena left school to help with the family, vineyards and the press house. Lena, being of small stature, won the task of scrubbing out the wine casks!

From World War 1 Pen Pals to Husband and Wife: An Island Love Story 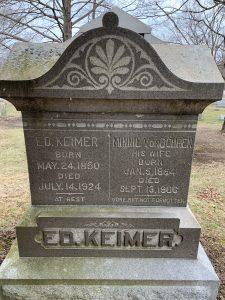 As time went on, Lena was pen pals during WWI with a young island man, William (Will) Market Jr. Upon his return from war, they married and moved into his in-law’s house and helped with the family business. Lena gave birth, in the house, to their only child William (Bill) Market III in 1929. Will passed in 1961, and Lena (or “Aunt Lena” as she was affectionately known) lived there until her passing in 1979. It is believed by many islanders that “Aunt Lena” still occasionally makes her presence known in the press house. From those who have had an experience say she always seemed friendly and supportive.

Bill Market (who eventually became known as “Boss” Bill) married a North Bass Island (Isle St. George) native, Mary Ann. They enjoyed many of the amenities the island had to offer, such as walks in De Rivera Park (adjacent to Put-in-Bay Harbor) and visiting Perry’s Cave. They enjoyed learning about how the Battle of Lake Erie, under the leadership of Commodore Oliver Hazard Perry during the War of 1812, led to the creation of Perry’s Victory and International Peace Memorial. It features a sizeable Doric Column in what is now a national park.

After several decades of living and working on the island Boss Bill purchased the Miller Boat Line in 1978 from William Miller. There was a time when Joe’s Bar was called the Market Winery or Bill’s Wine Cellar. Most of the Market and Keimer relatives are buried in Maple Leaf Cemetery (located on the South side of Put-in-Bay Road off Langram Road). 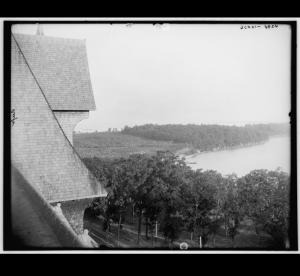 In the days when the Hotel Victory, one of the country’s largest hotels, was open, that portion of the island was mostly vineyards. A view of the island from “Castle Hill” looking toward where the airport is now shows a few buildings, one of which is Joe’s Bar.

The “back” part of the Joe’s building, along Catawba Ave., was added later, and its walls and ceiling were heavily insulated with sawdust, as it was used as an ice house to store ice blocks cut out of the lake in the years before refrigeration. It is one of many press houses built on the island in the period and into the early 20th century. At one time, there were 27 different wineries on the island until Prohibition saw the end of most of them.

As a historical note, Heineman’s survived Prohibition by making grape juice. It was sold with a pamphlet giving stringent instructions on precisely what *not to do* to keep the liquid from turning into wine. They also gave tours of the (then) newly discovered Crystal Cave; and by securing a contract with the local Catholic diocese to produce altar wine for mass. You can still find some of these press houses on the island at undisclosed locations known mostly to multi-generational islanders. One well-known example easily viewed on Langram Road is located on the Stonehenge property.

From a Bait Shop to Joe’s Bar

Sometime in the 1970s, Art Boyles, Sr., who was running the South Bass Island State Park at the time, bought the property, including the big house and the property behind the big house, all the way out to Meechen. He then purchased some buildings from the State Park and moved them to that property, including the white house across the drive from the “Bacchus Building.” He cleaned out the press house (it had been relegated to a storage barn over the years, painted it red (it had been white), and set up a little bait shop in there to keep his kids occupied during the summer.

Eventually, Art got a carry-out liquor license and expanded to beer and wine sales. In the ’80s, Art leased the press house to different people, the last of whom was Joe Suttmann, who bought the business in 1992. They were usually only open on summer weekends, and Joe would overnight upstairs, which had been made into a one-room apartment with a bath. The name of the place from the time Art’s kids ran it, and until Joe Suttmann bought it, was “The Press House.”

Joe expanded the apartment upstairs to accommodate his family of 4 during the summer months. It was a hot place to live up there! He upgraded the interior of the store, expanding from candy, bait, and tackle to a full-fledged convenience store, selling everything from tampons to tents, live bait, beer, groceries, and tackle. He came up with some sandwiches that he sold out of the kitchen and was gaining traction. At that point, he re-named the store “The Press House Corner Market”   (“Press House,” because it was a press house; “Corner,” because it is on a corner; and “Market” because it was a store… brilliant!). 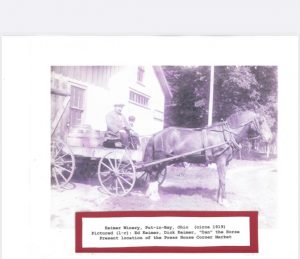 Already in his first year living on the island year-round, he found that he had acquired a new nickname, like those on the island, often do:   “Press House Joe.” Several years later, his neighbor Art Boyles, came to him with an offer to buy the corner property, including the store, the little white cottage adjacent to it (Uncle Tom’s Cabin”), and the big pole barn Joe named the “Bacchus Building.” Joe took a leap of faith and went into debt and to buy the property to keep the store and his livelihood.

After years of running a famous store and island hang-out, an on-premise liquor license became available from Tipp Niese (Beer Barrel Bar). He was selling the license he held from his establishment on the property of the old “Castle,” which he had called the “Baby Barrel.” Joe decided to make the leap, and thus, “Press House Joe’s Bar” was born.

Despite the work and worry of running the store, Joe enjoyed island life and was very happy. He was very involved with the community and left an indelible mark with his witty humor and as an announcer for many island events. His two kids grew up on the island and graduated from Put-in-Bay High School. Joe admits to some tough times but readily recounts how his Island friends and neighbors saw him through. After 17 years on the Island, Joe left to pursue his dream of returning to his homeland of Austria, He still occasionally visits Put-in-Bay and his other favorite Island, Key West. 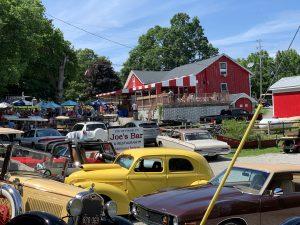 The current owners purchased Joe’s in the 2000s and shortened the name to Joe’s Bar. They continue to make improvements to the property, including an outdoor deck (with awning) and enhancements to the outdoor seating area. Needed updates to the interior include extending the bar, renovating the restrooms and kitchen. Joe’s Bar will continue to be a favorite local hang out, and a five-star dive bar but will always strive to retain the charm and character of what makes Joe’s Bar so unique. The owners remain an active part of the island community contributing time and money to the Chamber of Commerce and The Lake Erie Islands Historical Society.

Joe’s Bar is in Ottawa County, in the State of Ohio, on the Great Lakes. Put-in-Bay, Ohio, is also known as South Bass Island, which is adjacent to Gibraltar Island and just South of Middle Bass island. Nearby major cities include Cleveland, Sandusky, Port Clinton, Toledo, Detroit and Ontario, Canada. Put-in-Bay is part of the Lake Erie islands in the Midwest portion of the United States in North America. You can easily find Joe’s Bar by taking the Miller Ferry and renting a golf cart at one of the many golf cart rentals businesses on the island. A nearby Put-in-Bay hotel is the Birds Nest Resort (summer resort) which features a beautiful swimming pool on its nine-acre property. You won’t find dining room or rotunda, but they do have a beautiful pavilion.