The History of Oktoberfest

Crown Prince Ludwig, who was later to become King Ludwig I, was married to the Princess Therese of Saxony-Hildburghausen on October 12th, 1810, starting the history ok Oktoberfest. All of the citizens of Munich were invited to attend the wedding festivities held on the fields in front of the city gates to celebrate the happy royal event. The fields have been named Theresienwiese (“Theresa’s fields”) in honor of the Crown Princess ever since that day, although the locals have since abbreviated the name simply to the “Wies’n” to make it easier.

Horse races in the presence of the Royal Family marked the close of the event that was celebrated as a festival for the whole of Bavaria. The decision to repeat the horse races in the subsequent year gave rise to the tradition of the Oktoberfest. As you can see, beer was not the main ingredient in Oktoberfest when it started!

The Oktoberfest continues in 1811 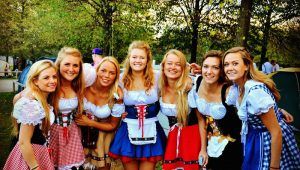 In 1811 an added feature to the horse races was the first Agricultural Show, designed to boost Bavarian agriculture and help the farmers. The horse races, which were the oldest and, at one time, the most popular event of the festival are no longer held today. But the Agricultural Show is still held every three years during the Oktoberfest on the southern part of the original festival grounds in Munich.

In the first few decades the choice of amusements was sparse. The first carousel and two swings were set up in 1818. These were for kids and adults alike. Visitors were able to quench their thirst at small beer stands which grew rapidly in number. In 1896, the beer stands were replaced by the first beer tents and halls set up by enterprising landlords with the backing of the breweries to try and get more customers and keep them in one area.

The remainder of the festival site was taken up by a fun-fair. The range of carousels etc. being offered was already increasing rapidly in the 1870s as the fairground trade continued to grow and develop in Germany and added to the history of Oktoberfest. 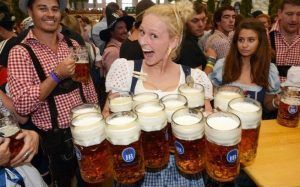 Today, the Munich Oktoberfest is the largest festival in the world, with an international flavor characteristic of the 21th century: some 6 million visitors from all around the world converge on the Oktoberfest in Germany each year. If you add in all the local Oktoberfests that happen in small and large communities around the world… this is truly one HUGE worldwide festival!